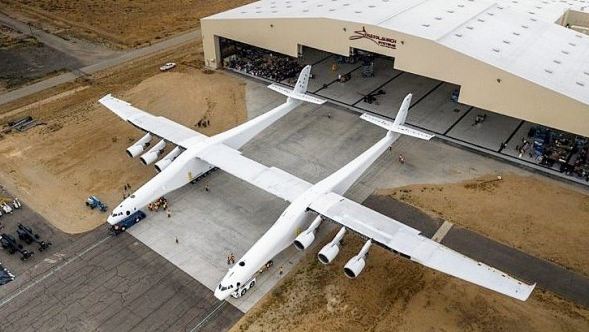 The six massive turbofan engines of Stratolaunch, the world’s largest aircraft, were all successfully tested for the first time a few days ago.

Seattle, WA, United States (4E) – The six massive turbofan engines of Stratolaunch, the world’s largest aircraft, were all successfully tested for the first time a few days ago.

Stratolaunch Systems Corporation, developer of Stratolaunch, reported the turbofans were allowed to idle one at a time at the company’s facility at the Mojave Air and Space Port in California. All six worked fine, said the company.

The Stratolaunch aircraft, which is nicknamed the “Roc” for the mythical bird of prey in Middle East lore, is part of a mobile launch system with two other primary components: a multi-stage payload “launch vehicle” to be launched at high altitude into space from Stratolaunch, and a mating and integration system by Dynetics.

The first test flights of Stratolaunch are planned to begin later this year with a goal of a commercial launch by 2020.

Stratolaunch, which is termed a carrier aircraft, provides a platform from which air-launch space missions can be staged. It consists of two fuselages, each 72 meters long.

The twin fuselages are connected to each other by wings, which have a combined wingspan of 117 meters, the longest of any aircraft ever built.

Each of the twin fuselages is supported by 12 main landing gear wheels and two nose gear wheels with a total of 28 wheels.

Stratolaunch will release the launch vehicle — which is the “Pegasus XL rocket” being developed by Orbital ATK — at about 12,000 meters altitude.

The solid-fueled rocket motor will ignite and Pegasus XL will deliver the satellite payload into low Earth orbit (LEO). Stratolaunch will return to Earth, land and be made ready for the next mission.

Pegasus can loft small payloads of up to 443 kilograms into LEO.

Stratolaunch CEO Jean Floyd said the company’s goal is to have a launch demonstration as early as 2019.

“Over the coming weeks and months, we’ll be actively conducting ground and flight line testing at the Mojave Air and Space Port,” said Floyd.