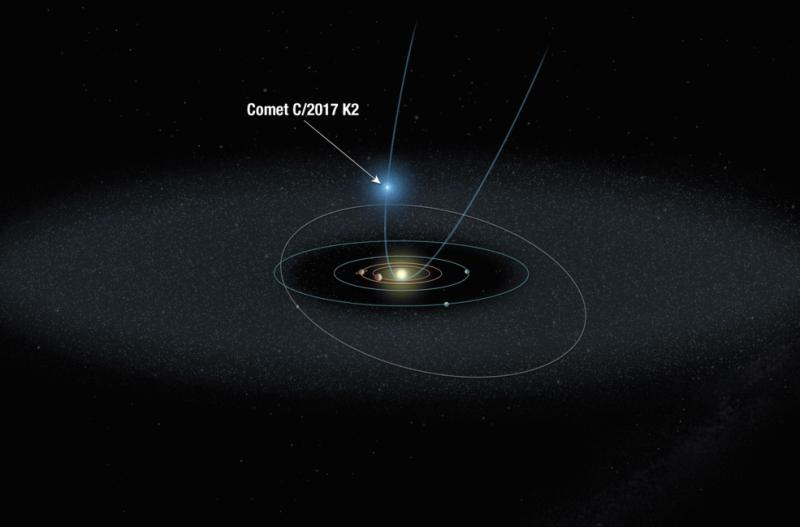 NASA’s Hubble telescope has photographed an incoming active comet named C/2017 K2. The comet, which was observed beyond Saturn’s orbit. It is expected to have its closest approach to the Sun in 2022.

Baltimore, MD, United States (4E) – The spotlight is on an incoming active comet, not Niburu of the doomsayers after NASA’s Hubble Telescope has detected it beyond Saturn’s orbit – some 1.5 billion miles from the Sun.

The comet, named C/2017 K2 (PANSTARRS) or “K2,” has a temperature of about minus 440 degrees Fahrenheit. It has already traveled for million years in space from its frigid home located beyond the solar system.

K2’s orbit indicates that it came from a spherical region called Oort Cloud, inhabited by comets numbering around billions. Comets are icy by-products when the solar system was formed some 4.6 billion years ago.

Coming from a frigid environment, the fuzzy cloud seen from Hubble is “not produced by the evaporation of water ice.”

“Instead, we think the activity is due to the sublimation (a solid changing to gas) of super-volatiles as K2 makes its maiden entry into the solar system’s planetary zone,” University of California lead researcher David Jewitt, in a NASA statement, explained.

“That’s why it’s special. This comet is so far away and so incredibly cold that water ice there is frozen like a rock,” Jewitt said.

From the photographs taken by Hubble, the University of California researcher said the “sunlight is heating frozen volatile gases – such as oxygen, nitrogen, carbon dioxide, and carbon monoxide.”

Based on the Hubble observations of K2’s coma, Jewitt suggests that “sunlight is heating frozen volatile gases – such as oxygen, nitrogen, carbon dioxide, and carbon monoxide.”

“This icy volatiles lifts off from the comet and release dust, forming the coma,” he added.

“I think this volatiles are spread all through K2, and in the beginning billions of years ago, they were probably all through every comet presently in the Oort Cloud,” Jewitt said.

The Panoramic Survey Telescope and Rapid Response System (Pan-STARRS) in Hawaii discovered the comet in May 2017. Pan-STARRS is NASA’s Near-Earth Object Observations Program.

The comet is expected to have its closest rendezvous with the Sun five years from now. Its closest approach to the Sun will not go beyond the orbit of Mars.