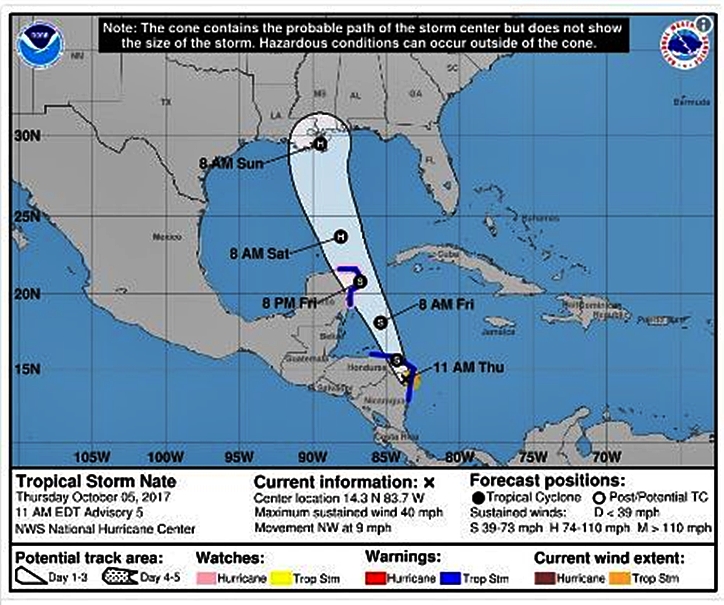 The Big Easy is in for either a Big Scare or a Big Hit as Tropical Storm Nate, which killed 20 people in Nicaragua, Costa Rica and Honduras on Oct. 5, seems set to savage the city that suffered horribly from Hurricane Katrina in 2005.

New Orleans, LA, United States (4E) – The Big Easy is in for either a Big Scare or a Big Hit as Tropical Storm Nate, which killed 20 people in Nicaragua, Costa Rica and Honduras on Oct. 5, seems set to savage the city that suffered horribly from Hurricane Katrina in 2005.

The U.S. National Hurricane Center (NHC) said Nate’s forecast track shifted slightly late in the morning of Oct. 5, and has placed New Orleans directly in its sights. Nate is expected to make landfall in the U.S. midmorning on Oct. 8 along the Louisiana coast as a hurricane.

It issued a hurricane warning for the U.S. coast from Grand Isle, Louisiana to the Alabama-Florida border.

A “life-threatening” storm surge warning was issued for an area from Morgan City, La., to the Alabama-Florida border and for the northern and western shores of Lake Pontchartrain.

That’s grim news for New Orleans whose problematic drainage system will be unable to cope with the floods Nate is expected to bring in its train.

New Orleans Mayor Mitch Landrieu met with local, state and federal officials (including representatives of the U.S. Army Corps of Engineers and the Louisiana National Guard) yesterday to discuss preparations for a hit by Nate.

City officials are worried New Orleans’ unique drainage system will continue to experience critical deficiencies exposed during heavy rainstorms in august. The heavy downpours led to the flooding of several hundred properties in the city.

Of New Orleans’ 120 drainage pumps, a dozen (including three major pumps) were out of service as of Oct. 5 for repairs or maintenance, said the city’s Sewerage & Water Board.

One inactive major pump is located at the city’s largest-capacity pump station in the Lakeview neighborhood. Another major pump in City Park is out of service.

The water board said it has backup generators at all 24 of its major pump stations, including 11 temporary generators.

Louisiana Governor John Bel Edwards said he will position National Guard troops in New Orleans to help the city in monitoring the pumps.

“We’ve had a number of threats this hurricane season, and we’ve been blessed when Harvey went left and Irma went right,” said Edwards. “That is not what we anticipate out of Nate, so everyone should take this very seriously.”