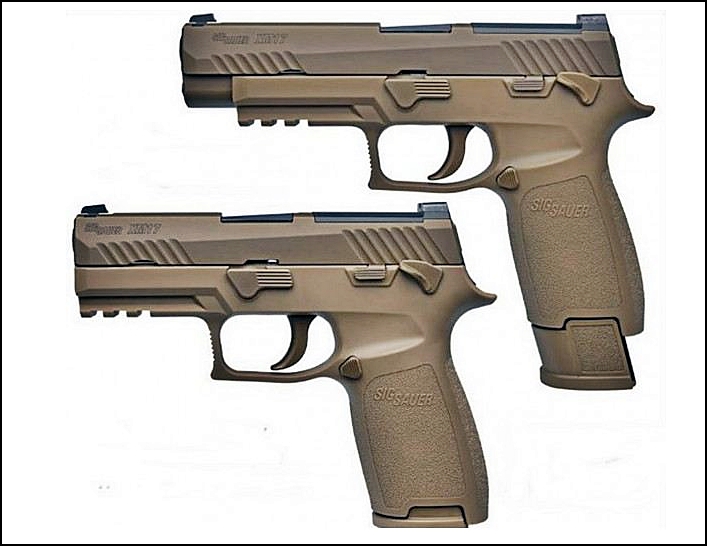 Men of the U.S. Army’s 101st Airborne Division based at Fort Campbell, Kentucky last week became the first fighting men in the Army to receive both versions of the Army’s new service pistol, the M17 (full size) semi-automatic pistol and its compact version, the M18.

Team leaders of the 101st Airborne will probably be issued the brand new sidearms, that are the navy variations of the German SIG Sauer P320, as back-up for his or her Colt M4 carbines.

“It is easier to fire and simpler to operate,” mentioned Sgt. Matthew J. Marsh of the 101st. “The pistol felt very natural in my hand. I am excited to take my experience back to my unit and share it with my soldiers.”

All Army items will get the M17 to switch the usual M9 Beretta over the following decade.

The M9 has change into “pretty dated technology,” mentioned Lt. Col. Steven Power, who oversees a part of the weapon improve.

“The specific performance improvements from (the M17 and M18) over the M9 include better accuracy, tighter dispersion, and better ergonomics, which combined result in a far more lethal pistol.”

The new pistols are geared up with an exterior security; self-illuminating sights for low-light situations; an built-in rail for attaching equipment and an Army normal suppressor conversion equipment to connect an acoustic/flash suppressor.

Both the M17 and M18 are chambered for the 9&instances;19mm Parabellum, however may be tailored to fireside bigger calibers like .357 SIG and .40 S&W. Pistols chambered for the 9mm can load a 17-round journal in normal. An optionally available 21-round prolonged journal is out there.

The ammunition chosen for each pistols is the “Winchester jacketed hollow point” spherical.