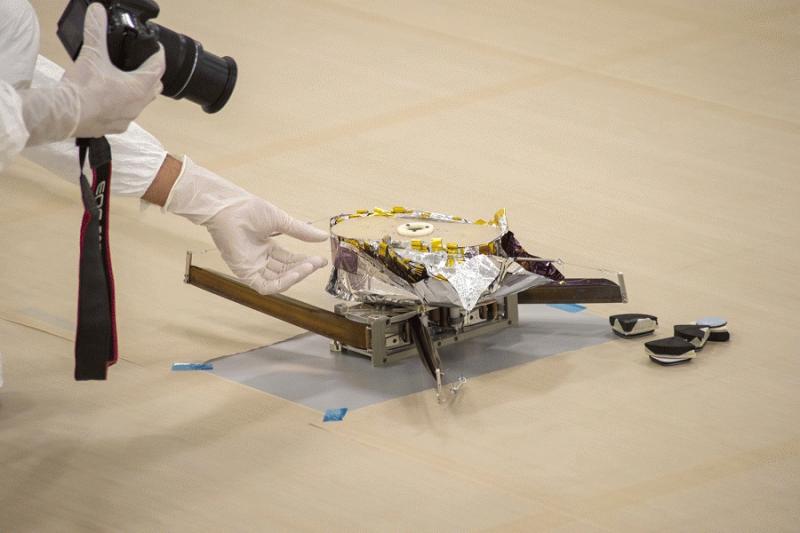 Scientists from NASA Advanced Exploration Systems, who managed the NEA Scout, said the test was important for them to make final adjustments to the solar sail to be used in flight.

“Last year, we did a deployment test on a half-scale prototype of the solar sail. We used the findings to make several improvements to the spacecraft’s sail deployment mechanism,” Tiffany Lockett said. Lockett is the Scout sail systems engineer at Marshall Space Flight Center.

“We incorporated a larger motor to help retract the booms after deployment and upgraded the software to perform the test,” she said.

Based on the test results, the sail restraint tab holding the sail before its deployment was improved and “the connection between the sail and the booms, included a pin puller to help lock the sail spool during transportation” was upgraded.

The NEA Scout, a six-unit CubeSat, is among the 13 secondary science payloads when NASA will launch its Space Launch System.

Scout’s solar sail principal investigator Les Johnson said the “NEA Scout will perform a reconnaissance fly-by and take pictures of an asteroid to learn more about the risks and challenges they may pose” to Earth.

The square-shaped sail, each side is almost the same length of a school bus, is designed to utilize solar energy to propel it through space.

According to NASA statement, “this method results in cost savings due to reduced weight and size of the payload with reduced fuel.” The NEA Scout will “deploy from the spacecraft using four arms – called booms – to hold the sail.”

To simulate space where the Scout will be deployed, the recent test was performed in a clean room “to ensure mechanism’s functionality.”

“We learned a lot from the results of today’s test,” NEA Scout sail systems mechanical designer Alex Few said. The results of the test will be analyzed further.