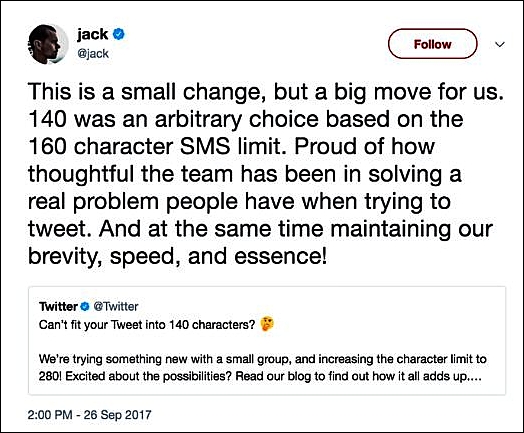 Imagine the havoc U.S. president Donald Trump can wreak with tweets 280 characters long. That nightmare scenario might be the norm later this year once Twitter finishes testing the public’s response to its new 280 character limit.

Once the testing ends, the 280 character tweets will roll out in all languages except Chinese, Japanese and Korean.

Twitter said the new 280-character limit will allow users to “easily express themselves.”

Dorsey tweeted this when announcing the change to 280:

“This is a small change, but a big move for us. 140 was an arbitrary choice based on the 160 character SMS limit. Proud of how thoughtful the team has been in solving a real problem people have when trying to tweet. And at the same time maintaining our brevity, speed, and essence!”

Explaining the change, Twitter said it wants to ease the pain of “cramming” among tweeters, or the painful process of trying to congeal one’s thoughts into just 140 characters by writing and re-writing.

Twitter was immediately deluged with tweets poking fun at or critical of the change.

Celebrity host Ellen DeGeneres tweeted, “I’m so excited to be part of @Twitter’s #280characters rollout. Let me just say it’s an honor and a privilege. I’d like to thank my wonderf”

And, according to one critic, “The 280-character limit is a terrible idea. The whole beauty of Twitter is that it forces you to express your ideas concisely.”

Dorsey took all the snarky remarks with a wry smile, it seems, tweeting: “We expected (and ??!) all the snark & critique for #280characters. Comes with the job. What matters now is we clearly show why this change is important, and prove to you all it’s better. Give us some time to learn and confirm (or challenge!) our ideas.”