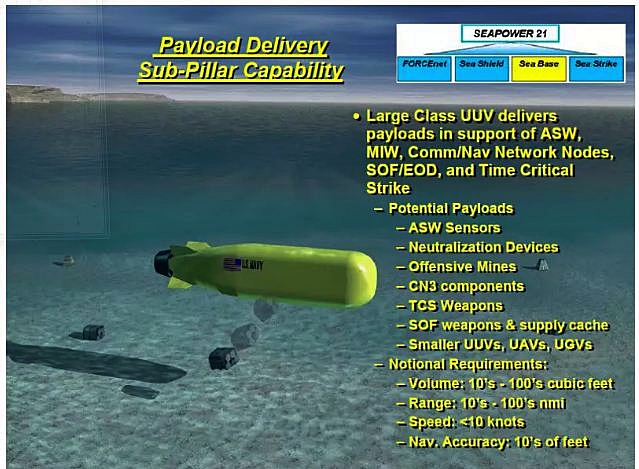 The U.S. Navy has organized its first ever dedicated underwater drone unit — Unmanned Undersea Vehicle Squadron One (UUVRON 1) — that will conduct clandestine or spy missions around the world.

Keyport, WA, United States (4E) – The U.S. Navy has organized its first ever dedicated underwater drone unit — Unmanned Undersea Vehicle Squadron One (UUVRON 1) — that will conduct clandestine or spy missions around the world.

UUVRON 1 was activated at a ceremony held recently at the Naval Undersea Warfare Center in Keyport, Washington. Among the components of UUVRON 1 is the USS Jimmy Carter (SSN-23), a Seawolf-class submarine that’s been transformed into a “spy submarine,” and the unmanned underwater vehicles (UUVs) of “Detachment Undersea Research and Development,” a unit long engaged in covert activities.

Navy Captain Robert Gaucher, chief of Submarine Development Squadron 5 or DEVRON 5 (mother unit of UUVRON 1), said the creation of UUVRON 1 shows the Navy’s commitment to the future of unmanned systems and undersea combat.

UUVRON 1 is expected to reach its full operational capability in 2020.

“We actually have action plans on all the missions we are trying to achieve,” said Rear Admiral Matthew Klunder, former director of the Intelligence, Surveillance and Reconnaissance Capabilities Division of the Information Dominance unit.

He said these actions plan “covers every spectrum,” from a military missions such as mine hunting and surveillance, to humanitarian assistance and research roles.

Most of the Navy’s existing underwater drones are either focused on mine hunting or are employed in oceanographic mapping and research.

The Navy, however, is also developing “Large Displacement Unmanned Undersea Vehicles” (LDUUVs) as part of a program known as Snakehead. UUVRON 1 will receive the first experimental LDUUV.

There are also future plans for extra large systems that can operate either as a remote controlled or autonomous mini-submarine.