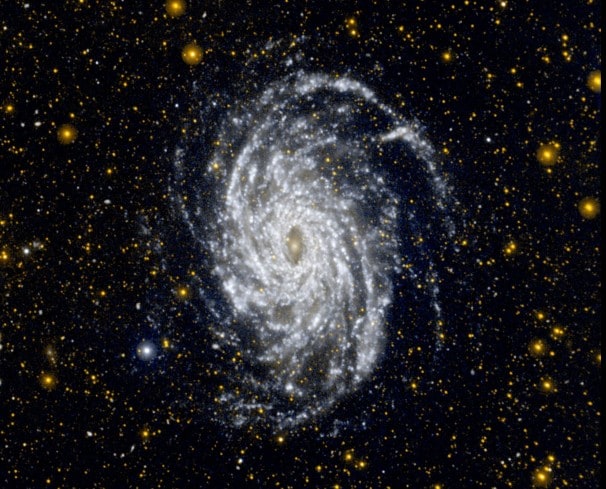 A cataclysmic collision of super-dense neutron stars has produced a massive amount of gold, 10 times bigger than the Earth. The event, recorded by about 70 observatories and astronomers, has revealed the birthplace of gold, silver, and other heavy metals.

Washington, DC, United States (4E) – Scientists had observed a cataclysmic collision of super-dense neutron stars that actually happened during the time of dinosaurs spewing out gold, silver, and other heavy metals into the universe.

The researchers said the amount of gold spewed out into space was unprecedented – 10 times bigger than the Earth. Together with it are silver, and other heavy metals in the periodic table of elements.

Where these precious metals were born was not known until the recent collisions that left a streak of bright lights across the universe, the researchers reported in a press conference held in Washington D.C. on October 16.

“It really is the last missing piece,” MIT astronomer Anna Frebel said, referring to the heavy metals spewed out into space, adding that “this is heaven for anyone working in the field.

Some 70 observatories and astronomers had recorded the cataclysmic event followed by a ripple created by gravitational waves. The Advanced Laser Interferometer Gravitational-Wave Observatory (LIGO) had observed the event on August 17.

An afterglow, ranging from observable light to infrared was coupled with the ripple of electromagnetic waves gave the scientists studying Einstein’s waves a field day. Albert Einstein, through his General Theory of Relativity, predicted the existence of gravitational waves long before the development of sophisticated instruments to observe it.

The scientist had observed the merger of neutron stars, creating a wide array of observable lights in the universe coupled with gravitational waves 12 hours after the collision. The dazzling lights had diminished after more than a week later followed by the rich outburst of x-rays and gravitational waves.

“The picture that you can put together by having all those sources is synergistic,” LIGO spokesperson David Shoemaker of MIT said.

Neutron stars are formed when massive dying stars breathe its last breath. The collected observations of the event have shed light what happened after neutron stars collide. It also provided an opportunity for scientists to measure the rate of the expansion of the universe.

LIGO member and scientist at New York’s Rochester Institute of Technology Richard O’Shaughness said: “this event is the Rosetta stone.”

LIGO in Italy had recorded a faint outburst, which has helped to narrow down the exact location of the event.

The weak signal, according to LIGO member Vicky Kalogera, helped pinpoint where the cataclysm occurred: “a part of the sky that was a blind spot of Virgo,” which is 30 square degrees of the southern sky.

The two detectors of LIGO in the United States had recorded at least 100 seconds of ripples in space and time before it sputtered out – the strongest and longest gravitational ripples ever observed by LIGO.

The observed lights – from bright light to infrared – tell the birthplace of gold and other precious metals. It was discovered that these heavy metals are formed from the materials rich in neutron spewed out into the space after the collision through a chain reaction called r-process. The r-process can only occur in an environment full of neutrons. In the process, the atomic nuclei feasted on neutrons and decay radioactively from which new elements are formed before it resumes gobbling more neutrons.

The process, according to scientists, created a unique afterglow called a kilonova.

“Until this event, we had never directly seen anywhere in nature these heavy elements being forged. Now we have,” Columbia University theoretical astrophysicist Brian Metzger said.

“It is a feeling like you’ve discovered some kind of secret of nature,” he added.