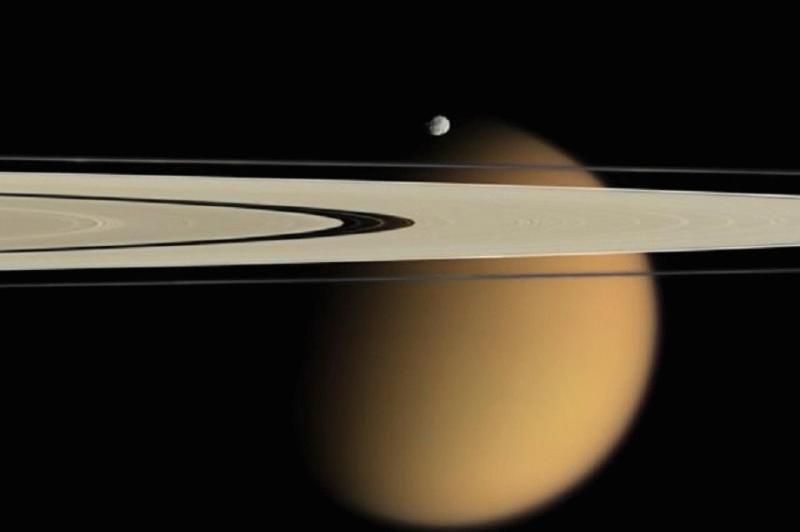 Scientists at UCLA have detected intense rainstorms that batter the surface of Titan, the largest of Saturn’s more than 60 moons. The rainstorms, they said, had increased in frequency over the years creating massive floods that flowed into rivers and spilling into lakes and seas.

Los Ageles, CA, United States (4E) – Intense rainstorms are raging in Titan, the largest of Saturn’s more than 60 moons creating massive floods on a once arid terrain in striking similarity with terrestrial storms with an only difference – liquid methane instead of rainwater.

“The most intense methane storms in our climate model dump at least a foot of rain a day, which comes close to what we saw in Houston from Hurricane Harvey,” principal investigator Jonathan Mitchell of UCLA’s Titan climate modeling research group said.

The storms, which in the past occur only less than once a Titan year – that is equivalent to 29 and a half Earth years – had occurred more frequently than expected. The once arid terrain is battered with massive floods that flowed into rivers and spilling into lakes and seas. Titan has some storm clouds that also bring monsoon-like downpours.

The study, published on October 9 in the journal Nature Geoscience, said the recent discovery of alluvial fans on Titan’s surface is due to the intense rainstorms it is experiencing. The researchers had likened it to the terrestrial rainstorms that caused a massive flow of sediment towards the lowlands, which later on led to the formation of alluvial fans.

Cassini spacecraft’s radar instrument had discovered the alluvial fans in Titan. The spacecraft’s mission ended in September 2017 after its first orbit around Saturn in 2004 by plunging to death into the planet’s atmosphere.

Scientists had already trained their observations on Titan’s surface long before Cassini had detected the alluvial fans. But the spacecraft had provided a wealth of information the moon’s surface showing that sand dunes are dominant in the lower latitudes while seas and lakes are widespread in its higher latitudes.

Titan’s alluvial fans, according to the UCLA researchers, are generally located closer to the moon’s northern and southern poles than to its equator, which means that the moon’s rainfall varies from one place to the other. Massive sand dunes are observed in the region near the equator where rainfall is absent.

The study’s findings, according to co-senior author Seulgi Moon, helped explain the relationship between intense rainstorms in the formation of Titan’s surface.

To understand the relationship between rainstorms and planetary surface formations could lead to greater understanding of the impact of climate change on Earth and other planetary bodies, Moon said.