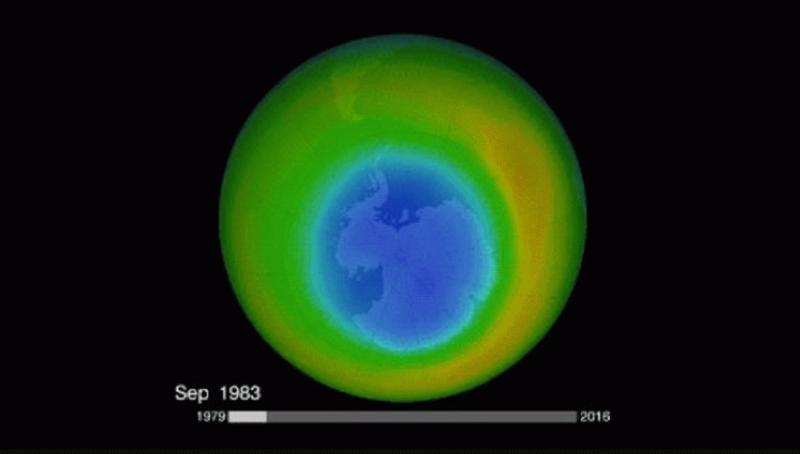 This year’s ozone hole is the smallest since 1988. It is no cause for a celebration, however, since the least ozone depletion is not related to human activities but due to natural variability.

Greenbelt, MD, United States (4E) – NASA said this year’s ozone depletion based on both ground and balloon measurements was the least during the peak of the ozone depletion cycle since 1988 after it had reached its peak on September 11.

“This is what we would expect to see given the weather conditions in the Antarctic stratosphere,” he added.

NASA scientists said when the formation of the stratospheric cloud is high and persistent it will lead to chlorine-and-bromine-catalyzed reactions that will destroy the ozone.

The same warm temperatures at the stratosphere had also accounted for the least ozone depletion in 2016.

This is no cause for celebrations, however. One, it is not related to the human activity. Second, the level of chlorine and bromine, known as ozone-depleting substances, in the atmosphere has remained high.

The scientists said the 2016 and 2017 lower ozone hole is not a sign of healing but due to natural variability.

The ozone hole was first detected in 1985, which led to the signing of an international covenant known as the Montreal Protocol on Substances that Deplete the Ozone Layer. Since then the ozone hole over Antarctica is expected to be less severe as the use of chlorine-containing compounds industrially known as chlorofluorocarbons continued to decline.

It is expected that the Antarctic ozone hole could be restored to its 1980 level by 2070.

The monitoring of the ozone hole is jointly conducted by NASA and the National Oceanic and Atmospheric Administration (NOAA).

“In the past, we’ve always seen ozone at some stratospheric altitudes go to zero by the end of September,” NOAA atmospheric chemist Bryan Johnson said.

“This year our balloon measurements showed the ozone loss rate stalled by the middle of September and ozone levels never reached zero,” he said.