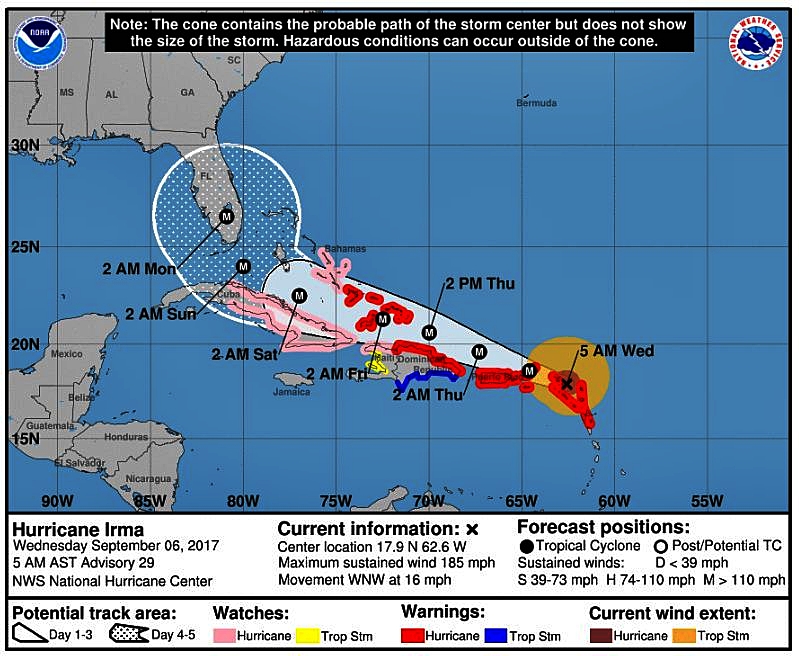 Still packing maximum sustained winds of 185 mph, the Category 5 Hurricane named Irma remains on track to smash into Florida by Sept. 11, dealing a second severe blow to the United States since August 25 when Hurricane Harvey made landfall in Texas.

As of 0956 GMT on September 6, Irma’s massive eye swept past the tiny Caribbean islands of Barbuda and toward Saint Martin, which lies just 300 km east of Puerto Rico.

Weathermen said Irma’s eye was larger than the entire island nation of Barbuda, which has an area of 160 square kilometers.

Irma is now the most powerful hurricane ever to make landfall in the Caribbean.

NHC said Irma’s wind speeds make it the most powerful hurricane in the Atlantic basin outside the Gulf of Mexico and Caribbean Sea in its recorded history.

Irma will tear into Puerto Rico on Wednesday.

Puerto Rico Gov. Ricardo Rosello issued a state of emergency for the U.S. territory. Irma is forecast to hit the Dominican Republic on Thursday and Cuba by Friday.

If Irma continues to turn north, it will head for South Florida by Saturday and roar through Florida’s Gulf or Atlantic Coast. The National Oceanic and Atmospheric Administration (NOAA) predicts Irma will rip into Florida in the early morning hours of Sept. 11, the 16th anniversary of the attack on New York by the Islamic terrorist group, Al Qaeda.

On Monday, Florida Gov. Rick Scott declared preemptive state of emergency for all 67 counties in the state to give residents time to prepare for this catastrophic event.

“In Florida, we always prepare for the worst and hope for the best and while the exact path of Irma is not absolutely known at this time, we cannot afford to not be prepared,” said Scott.

“This state of emergency allows our emergency management officials to act swiftly in the best interest of Floridians without the burden of bureaucracy or red tape.”

The White House on Tuesday evening declared a federal emergency for Florida, Puerto Rico and the U.S. Virgin Islands, making federal funds available for preparation ahead of Irma.

When Irma does make landfall in any U.S. territory, it will be the first time two Category 4 hurricanes made landfall in the United States in a single year. Hurricane Harvey devastated Texas on Aug. 25 as a Category 4 storm.

A Category 4 and Category 5 made landfall in the United States in 1992 but not two Category 4s.

And in another piece of distressing news, Tropical Storm Jose is expected to become a hurricane by Wednesday night.