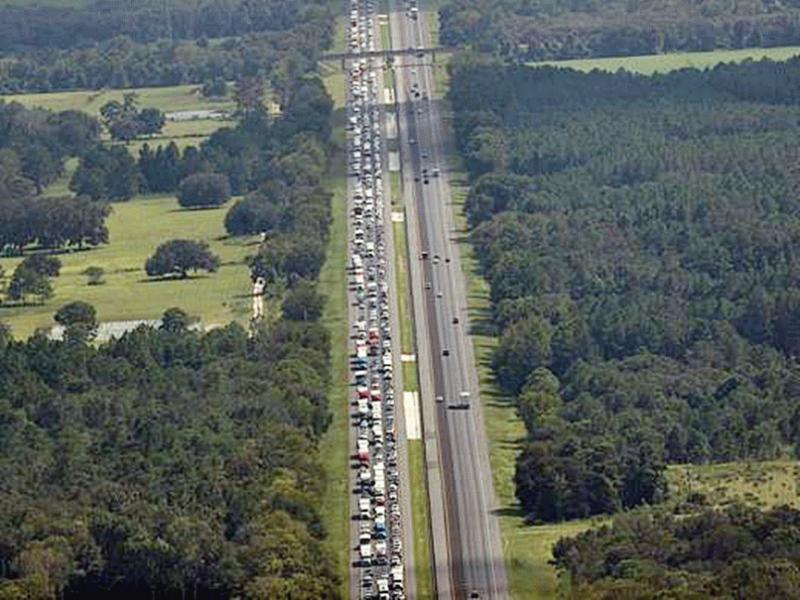 Killer Hurricane Irma, whose horrific 270 km/h winds are now increasing in strength as it rips through the warm waters of the Atlantic Ocean, has triggered the largest mass evacuation in Florida’s history ahead of its expected landfall off the Florida Keys on Sunday morning (Sept. 10).

Miami, FL, United States (4E) – Killer Hurricane Irma, whose horrific 270 km/h winds are now increasing in strength as it rips through the warm waters of the Atlantic Ocean, has triggered the largest mass evacuation in Florida’s history ahead of its expected landfall off the Florida Keys on Sunday morning (Sept. 10).

Emergency chiefs warn the horrific Category 5 hurricane will have a “truly devastating” impact on the United States, especially on Florida which will take a direct hit from the hurricane.

The Florida Turnpike, I-95 and I-75 have been flooded with fleeing vehicles since Sept. 7 with tens of thousands of Miami-Dade and Monroe County residents taking flight under evacuation orders. Traffic jams plague central and northern Florida as vehicles rumble northward to the dubious safety of neighboring Georgia, Alabama and South Carolina.

Only I-95 along the east coast and I-75 near the west coast are the only two major highways headed northwards out of the state.

By Thursday evening (Sept. 7), the Turnpike remained jammed from Palm Beach County through Orlando. The crawl continued up the Turnpike onto I-75 through Ocala, Gainesville and Lake City at the I-10 interchange.

“I know many of you are in traffic,” said Gov. Scott. “I know it’s frustrating but please be patient.

“You do not need to evacuate out of the state or hundreds of miles away to stay safe. Find shelters in your county.”

Fees on the state’s over 700 miles of toll roads have been suspended to allow unimpeded traffic flow.

The rising exodus of Floridians was exacerbated by the government ordering the mandatory evacuation of people living in Miami-Dade County, Broward County and Brevard County, which are among the most heavily populated in the state.

“Do not sit and wait for this storm to come,” Gov. Scott said. “Get out now.”

Broward County issued a mandatory evacuation for areas east of U.S. 1, an area with some 500,000 residents.

The National Hurricane Center (NHC) earlier issued a hurricane watch for south Florida as a final step before likely issuing a full hurricane warning for the weekend. A storm surge warning also was in effect for the Keys and part of the Jupiter Inlet.

Forecasters warn that Irma could slam head-on into the Miami metropolitan area and tear through the state’s Atlantic coast into Georgia and South Carolina.

Those that aren’t fleeing the Category 5 hurricane by car or plane are hunkering down in their homes and stocking up on essentials.

The National Oceanographic and Atmospheric Administration (NOAA) in its 5:00 p.m. EDT forecast on Sept. 7 said every major city in Florida will see dangerous conditions. It expects Irma will likely continue on to the southeastern U.S. after ramming into Florida.

A hurricane watch is currently in effect for all of southern Florida. This means hurricane conditions are possible within the next 72 hours.

The watches will be upgraded to warnings (which mean conditions are imminent) on Sept. 8 with additional watches and warnings going into effect for locations up the coast as Irma gets closer to landfall on Sept. 11.

The latest forecast from the National Hurricane Center (NHC) puts the worst part of the hurricane into southern Florida on Sept. 11.

This forecast sees Miami and its suburbs battered by intense winds and storm surge of a Category 4 hurricane. The storm will traverse the entire length of Florida before entering Georgia and the Carolinas.

NHC said Irma’s track straight up the Florida peninsula is worse than a head-on hit. It noted that when a storm strikes the shoreline at a perpendicular angle, the most intense winds and storm surge are focused on one particular location.

In Irma’s case, however, the strongest winds will devastate hundreds of miles of land, exposing tens of millions of people to intense winds and extreme flooding.

NHC expects a storm surge of five to 10 feet along the Florida coast in the hurricane watch.

Irma is more than twice the size of both Hurricane Charley, which hit Florida’s west coast in 2004, and Hurricane Andrew, which slammed into Miami in 1992.

In its ongooing rampage through the Caribbean islands, Irma has left 13 people dead at last count with thousands homeless.

Irma rendered the small island of Barbuda “barely habitable” and destroyed or damaged 95 percent of all structures on the island. It “almost destroyed” the neighboring island of Saint Martin. The death toll on both islands is expected to rise.