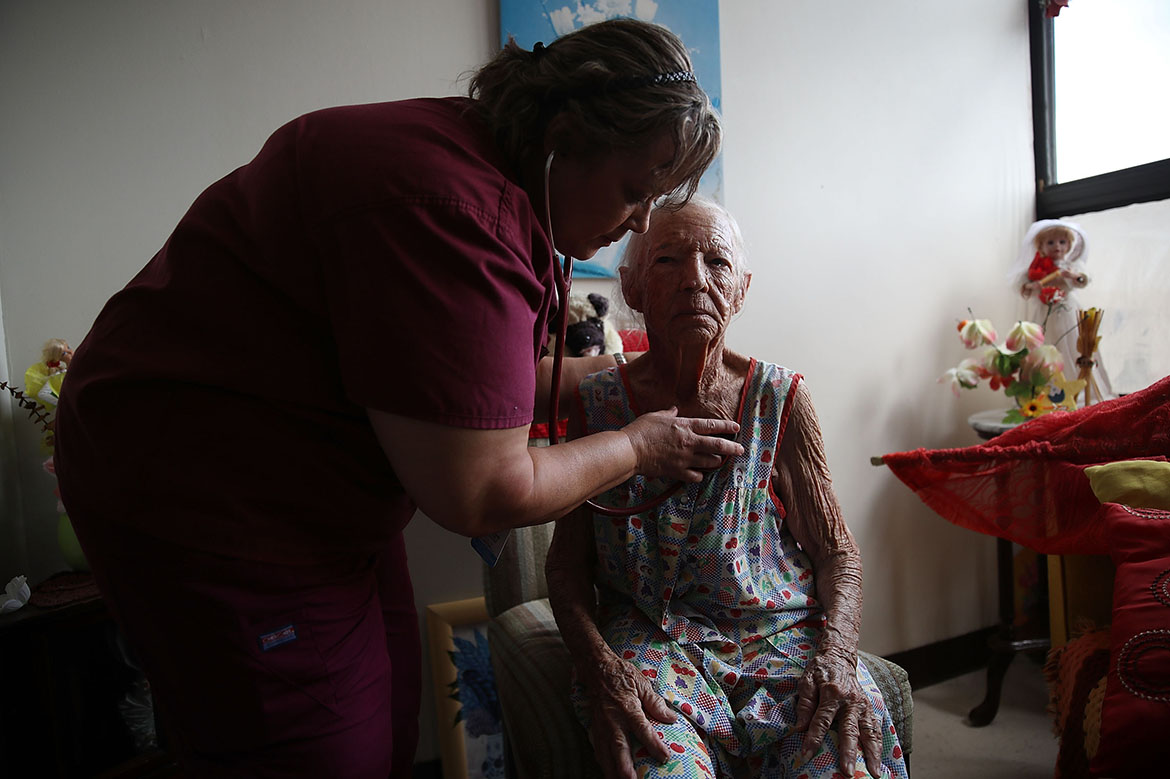 As President Donald Trump signals impatience to wind down emergency aid to Puerto Rico, the challenges wrought by Hurricane Maria to the health of Puerto Ricans and the island’s fragile health system are in many ways just beginning.

Three weeks after that direct hit, nearly four dozen deaths are associated with the storm. But the true toll on Puerto Rico’s 3.4 million residents is likely to involve sickness and loss of life that will only become apparent in the coming months and in indirect ways.

As victims continue to be found and stranded people reached, it will take time to assess the consequences of their missed care or undertreatment.

The situation in Puerto Rico’s health system is far more vulnerable than those in Texas or Florida, which also weathered hurricanes this fall — medically, economically and politically. A month after Hurricane Katrina in 2005, only about half of the final official fatalities had been tallied.

This KHN story also ran in Stat. It can be republished for free (details).

Puerto Rico has a higher rate of diabetes than any state, according to 2015 data from the U.S. Centers for Disease Control and Prevention. About half of the island’s population depends on Medicaid. And, unlike in the States, Puerto Rico’s Medicaid system receives a fixed amount to meet residents’ needs, a pot of money that could run dry next month, said Jenniffer González-Colón, Puerto Rico’s delegate to Congress.

“We’ve had a fiscal crisis, a Medicaid funding cliff, Hurricane Irma and Hurricane Maria —we are being hit from every angle,” she said.

Orlando Gutiérrez, an associate professor of nephrology at the University of Alabama-Birmingham and a board member of the American Kidney Fund, said Puerto Rico is the “perfect storm” for a disaster.

The Federal Emergency Management Agency has distributed food and water to help stave off disease or dehydration, relief workers have prioritized efforts to get hospitals and other health facilities operating again, and the Navy dispatched the hospital ship USNS Comfort, which has 250 beds.

Coordinated efforts to deliver fuel, water and medications to health facilities have allowed some to reopen. As of Oct. 12, federal emergency officials said nearly all Puerto Rican hospitals were open, although some are still dependent on generators. The Puerto Rican government said electricity has been restored to more than half of the hospitals. Nearly all of the dialysis centers are operating now, though many patients have missed treatments.

But Katia León, deputy director of primary care for the Association of Primary Care in Puerto Rico, said she believes the population’s health has worsened since the storm hit. Cases of diarrhea, pink eye and skin rashes are appearing in larger numbers, she said, and health officials are concerned about infections from contaminated water.

The potential for outbreaks means it is now more important than ever to keep clinics open, León said, even though the operating costs are likely to be high.

“We are talking about a situation that is going to continue in the long term … because this is a crisis without precedent,” she said.

Many residents are still unable to get to clinics or health centers for their chronic health conditions, such as diabetes or heart disease. Diabetes test strips and dialysis equipment have been in short supply since the storm. Patients went days or weeks without medication and treatment. Nutritious food and working refrigerators to store it in are scarce.

Some medicines are in tight supply or require arduous travel to secure.

Slow gains to provide electricity threaten patients on dialysis, who rely on power to filter their blood and survive. And mental trauma caused by the storm will linger long after buildings are reconstructed.

In addition, Puerto Rico was already facing a significant “brain drain,” as many young professionals, including doctors, moved to the U.S. mainland, said Andrew Schroeder, who works for DirectRelief, a private charity that has been coordinating shipments of medical supplies to the island. It will be an uphill battle to persuade these doctors and other health specialists to stay on the island now.

Hospitals and health clinics are working hard to get back to speed. Eddie Perez-Caban, the executive director of the Camuy Health Services clinic on the western side of Puerto Rico, said he was astonished after making the 25-minute commute through downed wires and fallen electric poles the day after Maria hit. He found a damaged roof, a broken air conditioning system and no electricity or running water — and about 75 of his employees ready to work. Five days later, the clinic opened with running water and AC and light powered by a generator.

“For so many people to show up — truthfully, it filled me with a lot of satisfaction to work with a group of people that have that commitment to the community and the patients we serve,” he said.

Republican leaders in the House of Representatives have proposed allotting an additional $1 billion for Puerto Rico’s Medicaid program to resupply its coffers as part of a bill that would extend the Children’s Health Insurance Program. But the legislation has been stalled in committee.

Puerto Rico’s program is different than those in the States. While states receive open-ended federal funding, Puerto Rico’s annual funding amount is capped — typically at more than $300 million. Nearly half of the island’s residents rely on the program for coverage. If the money runs out, as many as 900,000 beneficiaries could lose their health coverage, according to estimates from the Department of Health and Human Services under the Obama administration.

Another bill under consideration in Congress could offer Puerto Rico millions of dollars in disaster relief, an effort that has broad support. More than 6 in 10 Americans said Puerto Rico isn’t getting all the help it needs yet, and more than half said the emergency response has been too slow, with the federal government not doing enough to restore electricity and access to food and water, according to a poll released Thursday by the Kaiser Family Foundation. (Kaiser Health News is an editorially independent program of the foundation.)

In Puerto Rico, most of the roughly four dozen dialysis centers are now seeing patients, though that service is dependent on getting shipments of fuel to power generators and water and dialysis solution for the treatments. Some clinics are shortening their hours and the time of treatment. Instead of four-hour treatments, patients are receiving only three hours of dialysis, which saves on staffing time, supplies and use of generators.

Mike Spigler, an official with the American Kidney Fund, who is handling some of the emergency response for kidney patients on the island, describes the situation as “tenuous.”

In the short term, patients can function without dialysis, or with limited treatments. But as time goes on, the risk of heart failure and stroke begins to climb.

Schroeder also said he is worried about mental health services, which often get lower priority than food and shelter after a storm. He said people are traumatized and, without counseling, anxiety and depression could become major public problems. Multiple news outlets report that two of the island’s 34 total deaths attributed to the hurricane were suicides.

Older residents of the island are particularly vulnerable to mental trauma in the aftermath of the storm, said José Acarón, the director of the Puerto Rican branch of AARP. Approximately 1.2 million people in Puerto Rico are 50 or older, Acarón said. Many of them live outside of traditional nursing homes or independent living facilities, making them harder to reach.

“We still have a lot of challenges to overcome before things can go back to normal,” said Acarón. “But a return to normal is not going back to where we were before the hurricane. It’s a new normal.”